In 1922, two sisters of the Franciscan Missionaries of Mary traveling door-to-door to sell embroidered cloths to support the Order's missionary work met up with a benefactor they would never forget.  Carlos Munson, a local Quaker and owner of the famous Munson Steamship Lines, offered the Sisters more than they could hope to earn in handicrafts.  He presented them with a donation of a home and 15 acres of land, known as Elderfields, which he requested to be used as a summer camp for inner-city children.

The orchards and meadows of the Munson property were home to many children throughout 15 summers which followed.  In 1936, the Sisters had been asked to accept children who were afflicted with rheumatic fever, and they agreed, converting Mr. Munson's horse and carriage stable into a small Sanatorium.

With very little money and few alternatives for treatment, the Sisters managed to care for the sick children.  As word spread about the Sanatorium, the Sisters were forced to turn away  some children because of limited resources but grants from a Protestant Welfare Agency, the Martha Hall Foundation, miraculously enabled the Sisters to expand.  By 1949, St. Francis Hospital and Sanatorium was the largest hospital in the country devoted to cardiac care for children.

St. Francis Hospital has remained on the leading edge of technology, as pioneering open heart operations were conducted in the 1950's. Techniques such as the heart massage proved to have life saving value.  In 1956, adults were accepted for care.  In the 1960's and 1970's, the Hospital added a full range of general medical services to complement its cardiac program and, in the 1970's, St. Francis became the state's only specially designated Heart Center.

St. Francis Hospital is committed to providing responsive medical care in an environment that meets the multi-facted needs of each patient.  Preventing, detecting and treating cardiovascular disease is at the heart of St. Francis Hospital's mission.

One of the nation's leading cardiovascular centers, St. Francis Hospital performs more cases of open heart surgery and cardiac catheterization than any other hospital in New York State.

The Hospital's founders,The Franciscan Missionaries of Mary, still reside and work at the hospital, where they are called upon in pastoral care, counseling, liturgical and administrative role. 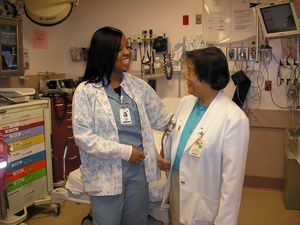