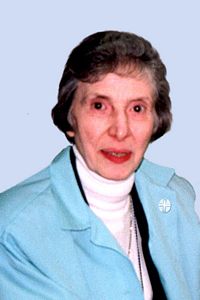 Youngest of Matteo and Cecilia Milano's three children and the only girl, Frances brought in the New Year 1925 and was raised in an Italian Catholic family in Wilkes-Barre, Pennsylvania. Italian was her first language within the family. She was a "public school product," both grade school, (she always got the funny parts in drama productions- this would come in handy in the future!) and high school, where she did the Commercial course.

After graduating from high school, she worked for a few months as receptionist and aide to a veterinarian; Frances then worked some 8 1/2 years as clerk/teletype operator and relief Manager for The Western Union Telegraph company. This latter job meant traveling around PA, NJ, DE and MD to replace managers when they were on vacation, sick leave or furlough, moving around every 2, 3 or 4 weeks, enjoying this form of travel. Part of a crew sent out for special occasions, she went to Washington DC at the time of President Roosevelt's death - a momentous time to be sending and receiving cross-country communications, especially meaningful to Frances, who had seen him in her home town when she was a little girl. At age 21, Frances got a "nudge" from above, as it were: "Why don't you become a nun?" " I ran for about five years," she said, and she finally asked for a sign and saw an article, "Franciscan Supper a Huge Success", and she asked her pastor if there were any Franciscans who traveled. In return, he sent her a Diocesan pamphlet with a list of congregations, and he had checked the Franciscan Missionaries of Mary, since they were sent overseas. Frances wrote to the FMM, received the response that an FMM commissioner would be in her area, met the sister, and decided that the Franciscan Missionaries of Mary were for her.

Prior to entering the Franciscan Missionaries of Mary at Fruit Hill, Frances went on a Holy Year pilgrimage to several western European countries, after which she traveled to Sicily, visiting the birthplaces of her parents and grandparents and spending some time with relatives living there She entered in September 1951, receiving the Habit and the name Antony Maria Zaccaria in March 1952. Just after her First Profession, Frances was sent to San Francisco where she was bursar, librarian and the supervision of young women residents. She made her final vows in March 1957, at Fruit Hill.

In December 1968, Frances was missioned to the US, to Woonsocket, Rl, where she was appointed Novice Mistress to the former Associate Sisters and superior of the community. She served as Spanish-to-English translator during the first part of the General Chapter of 1972, after which she was Provincial secretary and Provincial Councilor.

Frances had a year of renewal at the CREDO program in Spokane, WA, and again was translator during the long General Chapter of 1978-79. Following this Roman sojourn, Frances returned to Divine Providence in New York, this time being the Finance Director of McMahon Services, A six-month leave to care for her two aunts in Wilkes-Barre was followed by wonderful much-appreciated community service as Local Coordinator in St. Francis Hospital community. In 1994, again finding that her aunts needed her care, Frances moved to Holy Family Community in North Providence, and her aunts resided there in the Franciscan Missionaries of Mary Assisted Living Facility. She was again sent to St. Francis, where she loved doing volunteer work in the hospital, and where she was asked to be Local Coordinator of the community, which she did until her New Year's birthday in 2002, whereupon she was sent to North Providence, to Holy Family Community, to take part in the summer Sabbatical, and then the Mission Resource center to collaborate with Alma Dufault. Most appreciated for her joyful approach to life and her generous self-giving, Frances’ bright personality is a great gift to her community.