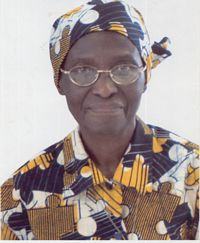 Elfriede M Jackson was born August 24, 1934 in River Cess County, Liberia, West Africa the fourth child born to the late Samuel and Martha Jackson. Her father was an accountant for several international companies in Liberia. Her beautiful mother was a housewife.

Elfriede was educated at St. Theresa’s Convent by the Franciscan Missionaries of Mary in Monrovia. Her family belonged to the Church of England. After living with the sisters as a boarding student for five years, she realized what a wonderful and different way of life the sisters led. She was amazed that 14 women living in the same house were never heard screaming at each other but working diligently from morning to night. She observed how they were dedicated to prayer and to their work of caring for others-working for God rather than for money-leaving their homes and families to come and teach her people about God’s love for all. She thought that if they could do it for her people why she could not do the same for her own people.

After becoming a Catholic, she requested entry into the Institute. Since there was no novitiate in

Liberia, arrangements were made for Elfriede to enter Holy Family Novitiate in North Providence, September 1960. She pronounced her final vows in Monrovia in 1966. She was sent in mission to Jirapa Hospital in Ghana to study nursing and then returned to Sanaquillie, Liberia to run a clinic where she remained for six years.

In 1978, she was sent on mission to England where she served as the community nurse in the Infirmary of St. Gabriel’s in Coldash. At that time, there were 40 sisters in the Infirmary. In 1980, she was one of six sisters on a team to start the Coldash Retreat center. After four years in the Center, she was sent in Mission to Liberia to organize and open a retreat center. For her spiritual growth, she had the opportunity to participate in the first Franciscan Spirituality renewal in Grottaferrata for three months. She also went to the Holy Land for a six month Biblical course run by the Holy Cross Sisters for sisters from the third world. Elfriede found this a wonderful, grace-filled experience to walk in the footprints of Jesus.

The Liberian civil war took a great toll on Elfriede. She recalls running from one place to another and people seeking food and shelter in the convent compound. Several members of her family were killed.

When the five sisters Adorers of the Precious Blood were brutally killed, she felt hopeless and helpless. She asked for respite and was sent to the US province. In 1993, she was sent to help in the novitiate in Fall River. After some years there, she was sent to the Provincialate in the Bronx where she helped in the kitchen and looked after hospitality.

For reasons of health, she was sent to Trinity Community, North Providence for treatment and recuperation. Presently, she helps wherever there is need, be it the Assisted Living Residence or the Fruit Hill Adult Day Care.